Northern Lights vs HMRC (UT): Appeal of an IT contractor dismissed by Upper Tribunal

Robert Lee (a project manager) received a tax bill of £70,000 from HM Revenue & Customs regarding multiple IT-related outside IR35 contracts he did through his limited company “Northern Lights Solutions” for Nationwide Building Society between 2012 and 2015. Nonetheless, HMRC said the manner in which Lee worked with Nationwide implied his commitment ought to have been classified as inside IR35, making him responsible to pay National Insurance Contributions (NICs) and Pay-As-You-Earn (PAYE) tax similarly like a permanent employee would have paid. 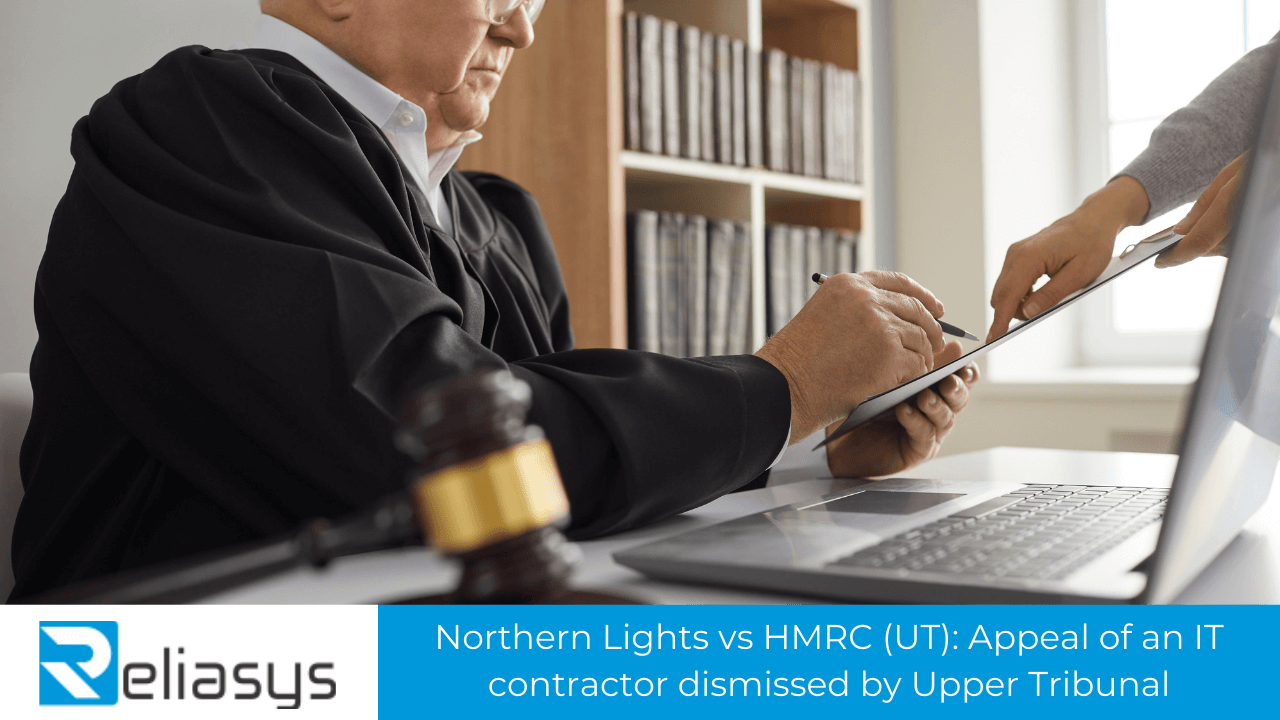 What were the reasons behind dismissal?

At first, Lee tried to challenge HMRC on the matter through a First-Tier Tribunal in February 2020, however, his appeal was dismissed. Later, in July 2020 he was given permission to lodge a complaint again, which initiated a two-day Upper Tribunal hearing in May 2021. The result of that appeal has now been unveiled. The Upper Tribunal judge affirmed that Lee's second appeal has likewise been dismissed on different grounds, including the big control that Nationwide had over how Lee functioned during his contract.

One more reason behind the dismissal of the appeal is that the council questioned the case that Lee had an authentic right of substitution, which is viewed as a critical determinant for a contract to be outside IR35. It means contractors ought to have the option to show that their end-customer isn't exclusively dependent on them to deliver the services they are being contracted for and that a substitute with similar abilities and experience could be provided if required.

Proof shared in the hearing notes recommends it would not be reasonable for Lee to ‘send another person to accomplish the work’ since they would not have ‘traverse security, and would not have a PC nor information on the work. The truth was that it was not going to happen.’

Should it bother us over evidence of control?

The presence of a working system inside a client’s firm that contractors should follow should be enough to demonstrate control over how the work is done.

Nationwide Building Society also failed to reassign Lee to different sections of the business as it picked without his understanding, and he could deny it. This shows a reasonable absence of control over the 'what' component of Lee's commitment and the 'what' component is commonly viewed as the most significant and profound angle while deciding business status. However, the appointed judges didn't believe this absence of control to be significant.

What experts have to say about the verdict?

As per Dave Chaplin (CEO of Contractor Calculator) who attended the hearings also; “As a result of multiple factors, including how the evidence was presented by HMRC and interpreted by the tribunal, alongside some surprising remarks around the case law aspects of control and mutuality of obligation (MOO) by the judges, this ruling does appear to be somewhat unfair.”

“Lee’s contract did include a legitimate unfettered right of substitution, but it was never exercised, and the client never gave witness evidence to back it up as a genuine right. The judges chose to disregard those substitution clauses. Substitution is no silver bullet to definitively proving a worker is not employed unless it has taken place. While I have some misgivings about some of the conclusions drawn, the law appears to be correctly applied,” explained Chaplin.

Reacting to the verdict, Matt Fryer (employment lawyer at IR35 expert Brookson Legal) said: “One of the key turning points associated with this case is the apparent lack of an enforceable right for the contractor to provide a substitute,”.

“This case was won and lost on fine margins, with many of the contractor’s terms pointing towards a genuinely self-employed relationship. So this is a surprise victory for HMRC who, let’s not forget, have a poor track record in tax tribunals.” as interpreted by Seb Maley (CEO at Qdos).

The evidence given by HMRC, which highlighted a few parts of the decision, seems to outline the facts identifying “substitution and control” in a way that doesn't line up with the ground reality of IT projects. This features the significance of keeping a more powerful and proven audit trail on projects in the future of Off-payroll.

Reliasys is a top umbrella company assisting contractors majorly in the IT, Medical and Healthcare sector. Get in touch with us today!