The IR35 rules are anti-avoidance rules designed to tackle what the taxman perceives as disguising employment status by providing services via an intermediary to avoid employment taxes and National Insurance contributions.

IR35 legislation came into effect in April 2000 to identify individuals who work as disguised permanent employees in order to avoid paying taxes. When IR35 applies, the earnings for the ‘disguised employees’ will be in the form of “Deemed Payment”, also known as the “Deemed Employment Payment” as they are ‘deemed’/ accounted to be the income of the worker. Deemed Employment Payment is usually paid on 5 April at the end of each tax year. 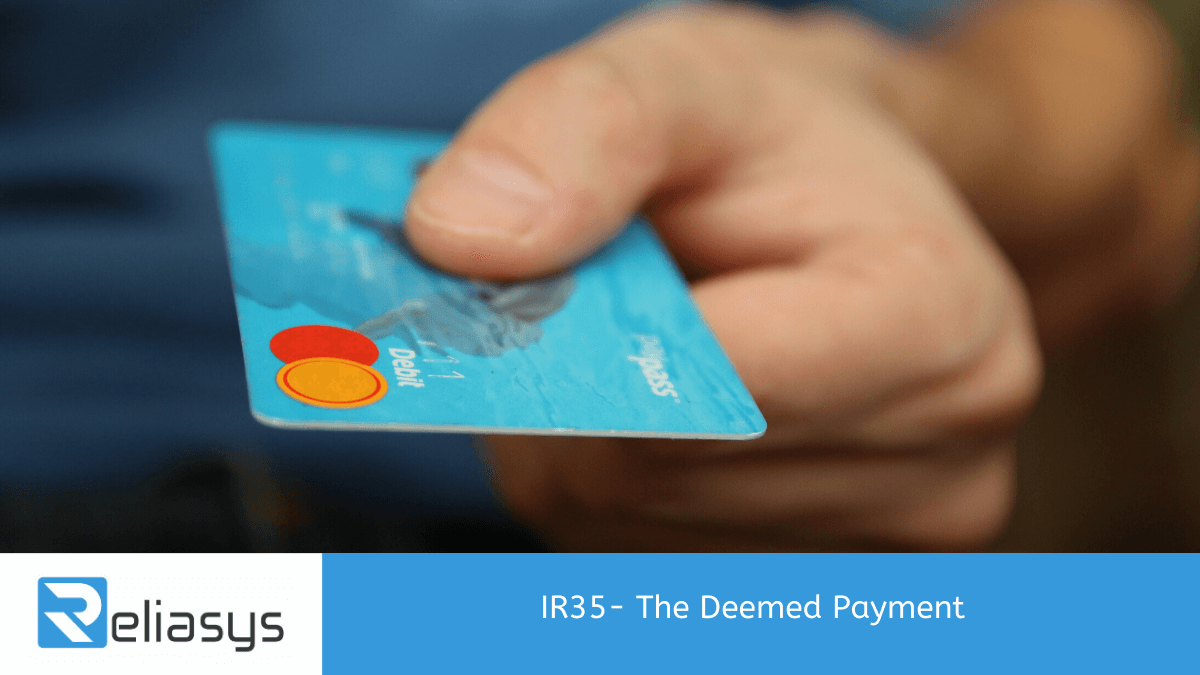 IR35 rules makes sure that workers pay the same tax and NIC as an employee if they:

If the client is in the private sector and IR35 rules apply, then the intermediary will need to calculate the deemed employment payment. This is the amount deemed to be the income of the worker, once deductions and employer NIC have been removed. The private sector includes third sector organizations, such as some charities.

Although the rules are expected to change by 6th April 2020. The deemed payment is given as a deduction when calculating the corporation tax liability of the PSC.

Do I need to calculate deemed payment?

To know if you need to work out the deemed payment follow the steps given below:

Step 1 – You first need to calculate how much your company received in a tax year from engagements under IR35. You need to consider all payments and benefits received by your company.

Step 2 – Calculate your employment income that you received from your company, this is the amount on which income tax and NI deductions were made and paid over to HMRC.

Calculation of the deemed payment

Step 1: deduct 5% of your payroll income

Step 2: Add Payments made directly to the Worker

Now you need to deduct expenses paid by the intermediary, in the tax year that relate to the relevant engagements. These expenses are the ones which the worker could have claimed as a deduction under the general rules if they had been directly employed by the client. If IR35 applies, each engagement will be regarded as a separate permanent employment for the purposes of travel and subsistence expenses. This implies that you cannot claim expenses for subsistence and travel if you regularly commute from home to a workplace for an off-payroll engagement.

Deduct any capital allowances in respect of expenditure incurred by the intermediary that could have been claimed by the worker, had the worker incurred the expenses and has been an employee of the client.

Deduct any contributions to an approved pension scheme made by the intermediary for the benefit of the worker.

Deduct any Class 1 and Class 1A National Insurance Contributions paid to HMRC by the intermediary in the tax year on the salary and benefits paid to the worker.

Step 7: Deduct Benefits and salary paid to the worker

Now, deduct the amount of salary and benefits already paid by the intermediary to their worker that has been taxed as employment income. If the result is nil or a negative number, there is no deemed employment payment and no further employment taxes to pay. If the result is positive move on to step 8

Step 9: The last step is to pay tax and NIC on the deemed employment payment

The amount left is the deemed payment. The last step is to pay and report tax and NIC due on the deemed employment payment.

Example:
Total income received by the service company id £60,000, wages paid to the worker £8,632, pension contribution made by the employer to a registered pension scheme £4,500.

Note: HMRC has produced a calculator that can be used to work out the deemed payment. It can be accessed from GOV.UK website. If you are a contractor in need of advice on IR35, call Reliasys Umbrella today on 020 3500 2615 and also drop us an email on info@reliasys.co.uk